Ticks needle, or lice anchor a large fish parasite that often infects the fish. Fleas are generally more common in fish reared in ponds than in the aquarium. Known for his performances as fleas needle tends to resemble a needle stuck in the body of the fish attacked. While referred to as anchor ticks, because this animal stuck his head into the body of the fish using a device similar to a kind of anchor.

Although referred to as “ticks” This animal actually belongs to a group of crustaceans. At least 10 species of ticks known needle, from the tenth of this type Lernae cyprinacea a type commonly found, in particular, in tropical areas like Indonesia. Lernae cyprinacea females can be seen in Figure 17. 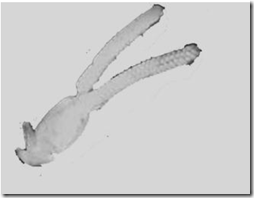 Ticks needle has a direct life cycle without an intermediary host. Fleas male and female will be paired on the surface of the fish’s body. Nevertheless only female louse who later became parasites. Ticks males will die after they mate. Cyprinacea Lernae cycle can be seen in Figure 18.

Female mite will stick his head into fish tissue with the aid of an anchor shaped so that he could attach itself tightly to the body of the infected fish. These animals will then absorb the blood and eat the fish cell parts. Cyprinacea Lernae attack on guppy can be seen in Figure 19.