Green turtle (Chelonia midas), is a destructive pest of cultivated plants seaweed most ferocious. Green turtles usually attack at night. These pests can prey exhausted cultivated plants in areas that are not too broad. Signs of seaweed plants attacked by the green turtle is the only plant left behind on the rope course and it looks like the former cut a sharp object. 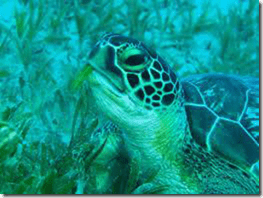 Urchins (Diadema), is a pest that damages the center of the thallus. Urchin attack can result in major parts of the branches of thallus separated from the parent plant. Urchin larvae are still planktonis can also be attached to the parts thalus seaweed, it can cause obstruction of seaweed thallus in the light of the sun, so it may indirectly interfere with photosynthesis in seaweed thallus.

Attacks urchins effect is relatively small and does not feel particularly on the cultivation area large enough. Pests do not attack urchin seaweed away from the bottom waters.